For those who remember The Wizard of Oz, Dorothy had a very trusted and loyal companion in Toto, her dog. Toto was always by Dorothys side through thick and thin, and seemed to show some cunning and courage in some situations. Who wouldn’t want a dog like that, right?

Toto is a terrier, a Cairn terrier dog to be exact. Being of the terrier breed, Cairn terrier dogs are small and compact dogs. They possess a very proportional head, along with a sturdy muzzle that is of medium length. Their ears are front-facing and are set widely apart the head. They have an unkempt outer coat and a supple undercoat. Their coats vary in color, ranging from a reddish hue, various shades of gray, and black, but never white; they are not known for shedding despite their hairy coats. Usually Cairn terrier dogs live for about twelve to fifteen years.

But apart from appearance, this breed of terrier evokes intelligence, courage and a foxy demeanor. With some exceptions of some roguish and mischievous behavior, a Cairn terrier dog possesses an intelligent air about them. They are independent dogs, often testing their owners capabilities in securing dominance in the household; though they are self-assured, confident dogs, they are generally not aggressive. That being said, these dogs can be easily trained, so long as the owners provide a stern but not too ruthless physical and mental training regimen. They crave constant affection and attention from their owners, which they reciprocate with such devotion and loyalty. Most Cairn terrier dogs are generally friendly to strangers, so long as they do not instigate nor provoke them. This goes as well with their interactions with other dogs for the most part they are sociable to other dogs, but they will hold their ground if challenged. They are prone to barking, which often happens when they become bored or left alone. For people who own a yard, be wary of letting them loose they have a strong prey drive, often chasing vermin and other small animals they might see. They are also notorious diggers that can really do a number on ones yard. These dogs are very adaptable to any living condition of their owners.

As pets, these dogs are very loyal, affectionate, and are worthy companions for any would-be owners. They say good things come in small packages, and this dog attests to this saying. 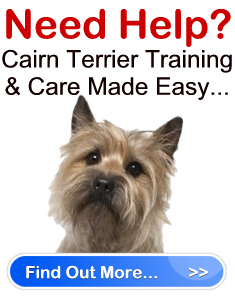